As always, a variety of routine fixes, performance improvements, and backend monitoring improvements were rolled out. In addition, many of the changes below are toward stronger features in the future. But the big headliners for now are better scraping and heatmap tables.

Heatmap tables show compare two categories, with darkness showing the amount in each cell. For instance, this heatmap table shows how frequently different Calls-To-Action are used by site section. We can see that Change Request Flowchart is the most commonly-used CTA across the site, and that articles has the most CTAs.

We are also close to launching scatter charts, which is a good way to compare categories with more values.

Content Chimera has always had the ability to scrape patterns out of the content, and it always did so from a local cache of the site. That said, creating, managing, and running patterns was cumbersome. So we made a variety of improvements.

Before you needed to separately select scope, pattern, and test. Now, instead of selecting "Full HTML", "Table", "Has", you just select "Tables". So you now interact with Full Patterns, which are a combination of scope (where to even look for the pattern), pattern (why to pull from the scope), and test (what single test, using a simple "does it have a value?").

2. Define your own full patterns.

You can now define your own full patterns. You can select a combination of scope, pattern, and test, like before (although now you can name them and re-use them):

You can even define the *components* of a pattern extraction:

Do you happen to be blessed with nice, clean metadata exposed like this?

If so, when defining a scope just select the new "Meta Tag" option and just enter DC.subject or the specific meta-tag you want to capture. For pattern, select either All (which would work in the example here) or Comma-Separated (which will pull out from comma-separated lists).

You can now test a pattern before unleashing it against the entire site. For example, here is a test against the content above, using a Meta Tag scope on DC.subject: 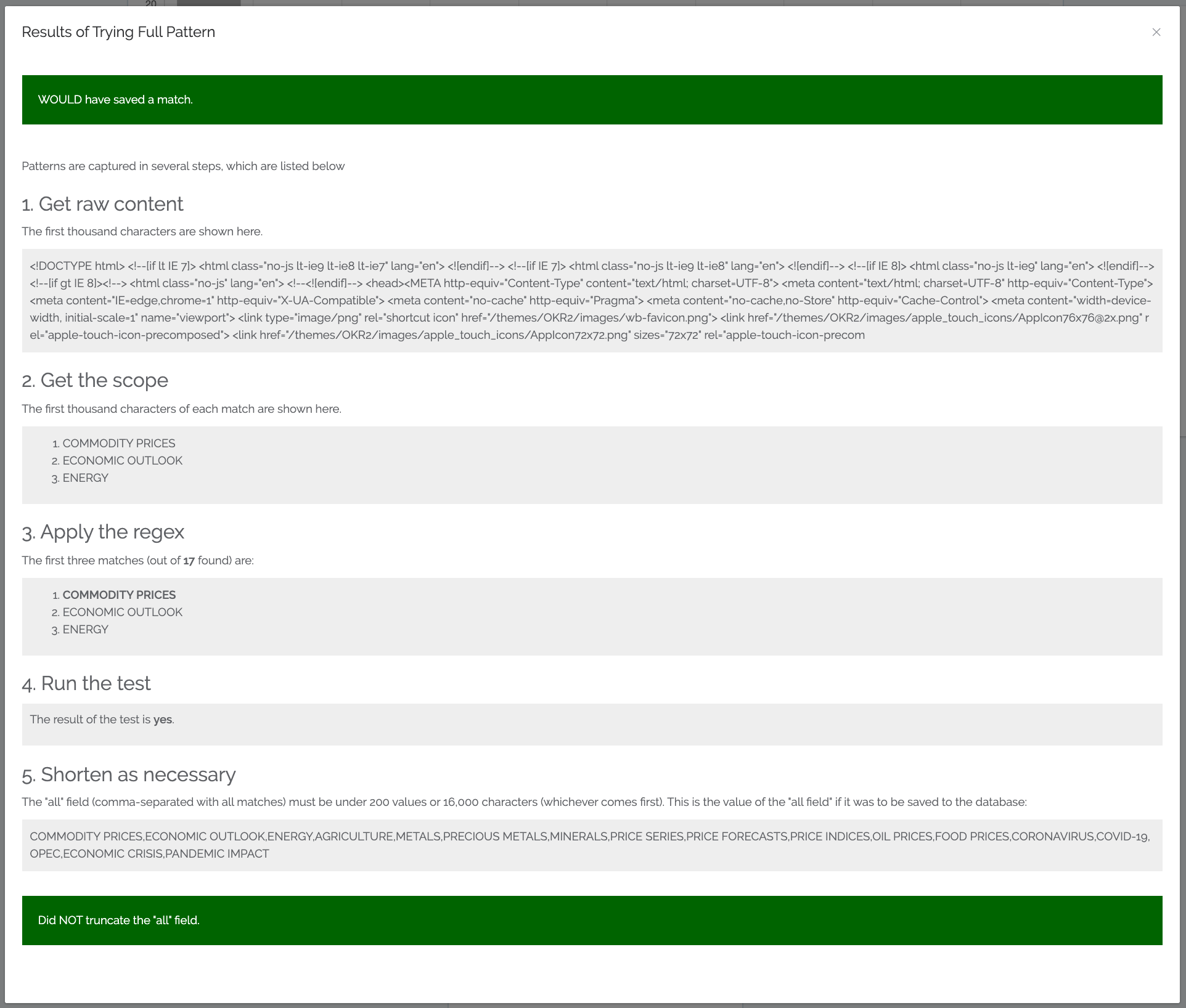 Whenever you scrape a pattern, several columns are generated for your charting and decision-making. Now we added an "all" column. This will list all the values (actually, there are limits: it just captures the first 200 values or 16,000 characters, whichever comes first). We actually are actively testing sophisticated multi-value analysis as well, which will really ramp up the value of the "all" columns.

6. Scrape multiple patterns at once. 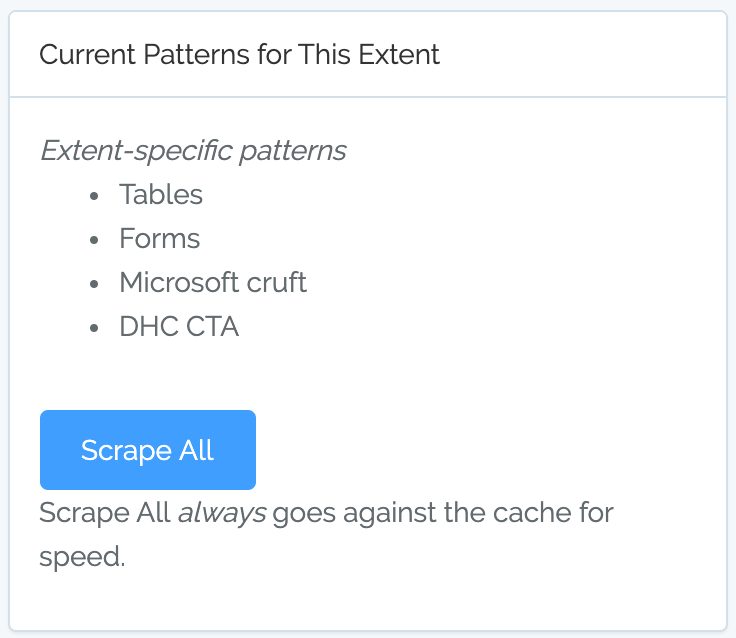 *Actually, you can add patterns to any extent. An extent is a site, group of sites, or client.

We have been working hard on an upcoming feature: multi-value analysis. This will allow analysis of tagging / topics for example (each piece of content can have multiple tags or topics applied to it). This is a technically-difficult task that will take some time to completely develop and deploy. For now, we have been making a variety of backend changes such as weaving in an entirely different database type for this multi-value analysis and better scraping of multi-values

Over the past weeks we have trickled out a variety of smaller changes, such as implementing a new approach logging to allow better visibility and fixing a bug where a second pass of a pattern scrape wasn't updating correctly.

We have developed a new approach for more quickly deploying new forms to control more in Content Chimera (not glamorous but should help us in the future). For now, we have added the following forms:

In treemap view (since that is a true hierarchy, and coloring works differently in a treemap):

In addition, there were some bugs in random sampling that have been fixed. Also, the charting is slightly faster now.

Now, when you do RoT analysis, you can also do reading analysis. Then you can use the reading level data just like all other data, for instance to graph the distribution of reading levels across the pages of your site.

There were a ton of related changes that we wanted to roll out together, so today's deployment was big. One theme is more consistent asset filters (rules to filter assets by, such as folder1 = articles), which are now used in rules and charts -- this is now generalized so will probably be added elsewhere as well.